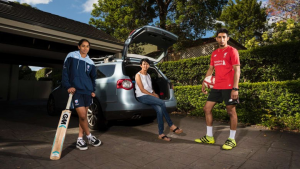 Parents left stressed and overwhelmed by their children’s sporting activities: report  – article from the Sydney Morning Herald By Andrew Taylor 17 November 2017 — 2:48pm Their home is in Killara on Sydney’s north shore, but much of Roopa Mehta’s family life is spent on the road. “We were joking the other day our car is like our home,” she said. “We eat in the car, we sleep in the car, we listen to music in the car, we do homework in the car.” Roopa Mehta estimates she spends up to 20 hours a week on her her children Shivani and Anish’s sporting activities. Mrs Mehta and her husband Atul spend up to 20 hours a week on her children’s sporting activities, including about seven hours driving them to training and matches as far away as the Sutherland Shire, Campbelltown, Blacktown and Nowra. Mrs Mehta’s 14-year-old daughter Shivani plays cricket for NSW as well as soccer, touch football and futsal. Her 17-year-old son Anish plays cricket, soccer and surfs. Roopa Mehta said the benefits of sport for her children outweigh the impact: “We do love watching them play sports.” Their sporting commitments mean it is a challenge for the family to sit down together on weekdays to share a meal. “I wouldn’t call it stressful but it does definitely eat into family time,” Mrs Mehta said. Lengthy car trips to sporting matches mean the couple rarely have the luxury of a weekend lie-in. “But you get there and it’s just a lovely way to start your Sunday watching the game and watching the kids play and do well,” she said. “We do love watching them play sports. “There are so many benefits of playing sport and they far outweigh what we have to do.” Hefty price tag As well as eating up time, children’s sport can also have a hefty price tag. Mrs Mehta estimates she has spent about $7750 this year on her teenagers’ sporting activities – $2400 on registration fees, $2500 on equipment, $2500 on transport and tolls, and $350 on uniforms. The NSW government introduced a $100 sporting rebate for school-age children in this year’s budget. But a report into the impact of children’s sporting activities found parents spend an average of $2180 a year – a cost that more than three-quarters of those surveyed said was “very expensive”. Parents estimated spending an average of $533 for extra training or coaching, $409 for sports camps and tours or away games and $337 in joining clubs for their children each year, according toThe Australian Active Kids Report. Parents also forked out an average $297 for competition fees, $206 for equipment and $172 for clothes. The report, which surveyed 1000 parents with at least one child, found children’s sport also soaked up substantial amounts of time. Parents spend an average of 848 hours a year transporting, waiting and being involved in their children’s sporting activities – this equates to more than eight hours on weekdays and 7.7 hours during the weekends. The report found most parents were happy to be involved in their children’s sporting activities, but many said it can become overwhelming or tiring. “Many parents lament the costs, how difficult it is to find the time or find the expectations and pressure too stressful,” the report said. Making sacrifices “The majority of parents also claim to have made financial sacrifices to support their children’s sporting activities, including less discretionary spending, less family activities or less budget for family holidays,” the report said. To juggle motherhood with her career, Mrs Mehta set up her own business so she could work part-time from home. “There’s a sacrifice in terms of how I work, and there’s a social sacrifice I guess because sometimes we can’t do things socially because we have to be up at the crack of dawn for sport,” she said. Mrs Mehta said other parents made similar sacrifices taking their children to music and band practice, dance lessons or drama classes. “The common thing with parents now is we fit school into everything else,” she said. “The day revolves around all these other activities and school somehow gets slotted in.” Paul Marshall, a senior lecturer in sport and exercise science at Western Sydney University, said children were today allowed less time for “free play”. “We replace that nowadays with these structured activities,” Dr Marshall said. ” My older children go to swimming lessons once per week, play a sport during winter, and currently do gymnastics and nippers at the local club. My daughter also does a ballet-dance class aimed for preschoolers.” But he expressed surprise about the amount of time spent on sport. “That does seem like a lot, but if it is a priority why reduce the time?” he said. “Maybe provide more affirmative support as a society that this commitment is a great investment in the future of our children. “I think more information needs to be provided at a community level about what is available and is cost effective. Kicking a ball down at the park is pretty cheap, but requires the parent committing time and realising it is a good thing to do.” Joanne Orlando, a senior lecturer in early childhood education at Western Sydney University, said there is pressure on parents for their children to succeed. “This is interpreted by some parents as finding out early what their child’s gift or talent is so they can nurture it early, which will give their child the edge when it comes to a successful career,” she said. “Other parents aim to make sure that their child is good at many things, that’s why after-school classes for sport and everything are so popular.” Dr Orlando said pressures caused by the cost and time of sporting activities may affect parents’ attitude to sport and their child’s enjoyment of it: “It’s not just the nature of sports that’s changed but the expectations all round of what we should be doing as parents.”
Share this post

No Comments yet. Be the first one to comment!

Sign up here to get news about becoming a star or following our stars 🌟 .

Embed this profile widget in your site or blog

Copy the code below and paste it into your website or blog.

Copy the link below and start sharing!

This link is unique to your account and will track your shares and the pledges raised as a result. Learn More